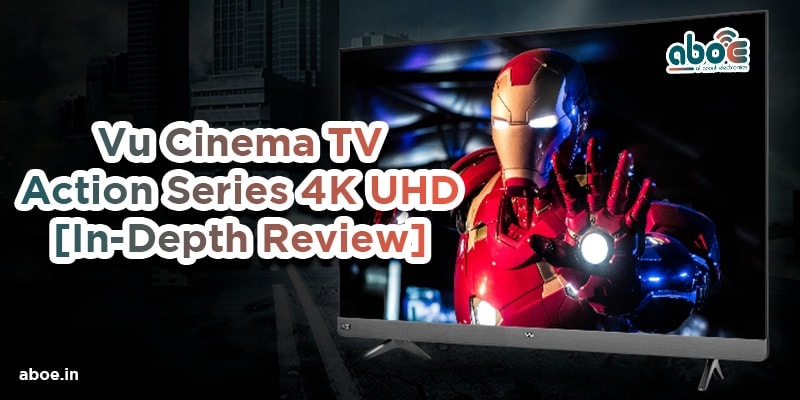 The TV largest-selling brand across E-commerce in India, Vu technology, has launched a Vu Cinema TV – Action Series 4K UHD. To compete with giant companies like Samsung, Sony, LG, and Panasonic, the company has come up with a new television series to grab the market share in premium television.

Vu recently launched the smart TV with 4K ultra HD display in two sizes. You can get this television in 55 and 65 inches respectively. Smart TV has already started gaining popularity in the Indian television market.

The newly launched products by Vu are smart televisions. The television contains official Android Pie 9.0, Google Play Store, Google Ecosystem that includes music, movies, TV and games, built-in Chromecast, parental control, and so on. Vu Cinema TV – Action Series has 2 GB RAM and 16 GB storage that offers you a seamless experience. It supports Bluetooth 5.0 to connect your smartphone or laptop easily and watch movies or shows. Moreover, the facility of Wifi is also given so you can connect the television to the internet.

Vu Technologies has not ignored the licensed apps as these are the most demanded. Vu Cinema TV – Action Series 4K support Youtube, Netflix, Amazon Prime Video, Hotstar, and Google Play Hotkeys on remote control. So, now you can watch all your favorite movies and web series on fantastic display. If you often watch Youtube videos, you can watch Youtube videos of your favourite Youtubers on your Vu television.

Vu Cinema TV – Action Series 4K UHD offers a cinematic soundbar and 100 Watt supersonic sound that amaze you with cinematic sound effects. DTX Virtual X Surround and Advanced Dolby Audio MS12 are key features that produce realistic sound. Also, there are 4 master and 2 tweeter speakers for directional sound. Even after having the best sound features, you also get sports sound mode! What else can we expect!

When it comes to design, the bazzle less design looks premium and elegant in your home or office. The Pixelium Glass Technology gives the stunning output. The technology offers 4K visuals and motion smoothing. The premium design of the television can completely change the look of your drawing room. Moreover, it is equipped with Dolby Vision and HDR10. The display comes with PC and Gaming mode. Vu Cinema TV Action Series also has a powerful processor. The 1.4GHz quad-core processor and a powerful GPU allow you to get smooth surfing and viewing experience.

There are three HDMI ports for connectivity to connect set up box, Blu Ray players, gaming consoles, and so on. Also, the two USB ports are also given to connect hard drives and other USB services.

With this Vu Action Series television, you get a 3-years of warranty provided by the company. Along with the product, Vu gives you two table-top stands, a power cord, remote with an option of Google Assitance, 2 AAA batteries, a user manual, and a wall mount.

The product has tons of features, outstanding build quality, and fantastic sound and display. And the most important, Vu Cinema TV – Action Series 4K UHD is available at attractive rates!

So, what are you waiting for!