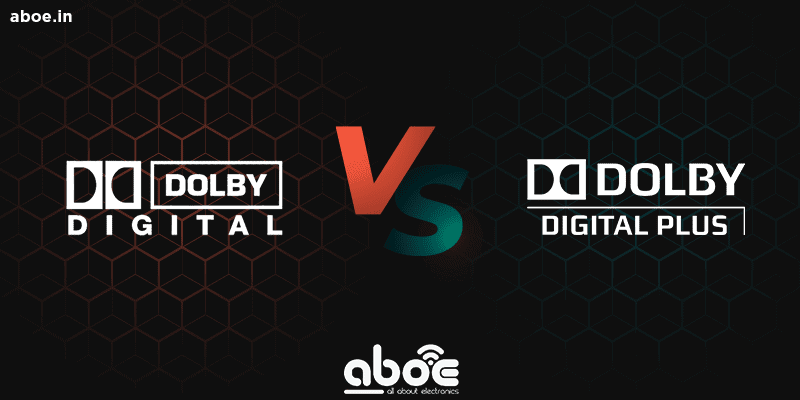 In the world of sound, it is always important to have a clear idea of what you want in your systems to get the best results. But with the number of options that are flooding up the market, it has now become more important than ever to make sure that you have all the information before making a purchase. The blog contains a comprehensive analysis of Dolby digital vs Dolby digital plus.

As the home viewing experience enriches more and more as time passes by, new surround sound systems have popped up bringing more and more detail and realism to your Saturday night home cinema experience. However, there are two that dominate the majority of the market space at the present moment, the Dolby Digital and the subsequent Dolby digital plus.

What is Dolby Digital?

Before we go on to explain which one might be a better fit for your home, let us first understand what exactly is Dolby Digital. A basic audio encoding system that works along with DVD, Blu-ray disk, and even the ultra HD Blu-Ray disc, along with the common television and other media devices. This perfect encoder provides an efficient transfer of the signals that works perfectly with any of the common home theatre systems.

In simple words, the Dolby Digital is a voice encoder and decoder that will act as the signal transference unit between your source and receiver of the sound. Often referred to as the 5.1 surround sound system, however, the Dolby digital practically means the digital encoding of the audio and not exactly the number of channels the system has. Also referred to as the DD, DD 5.1, or even the AC3 it has been a leading contender in the audio market for quite some time now.

Use headphones or earphones for a better sound experience.

With an amazing range of connectivity options, the following are the various channel options that work well along with the Dolby Digital.

One of the most famous ones, the 5.1 is defined as the five-speaker set up that will give you the surround sound experience. This would include a right, a right surround, a center, a left and a left surround set up along with a subwoofer.

Represented by two speakers each placed on the left and the right from the speaker position this is the least requirement for replication of near-life sound.

This is generally described by one or a set of two speakers that both emit the same sound so that there seems to be a singular source of sound placed right in the middle of the space of the two speakers.

What is Dolby Digital Plus?

The Dolby Digital Plus is the high definition digital surround sound format that has been designed to work with up to 8 (7.1) channels of working. This is known as the elite successor of Dolby Digital and works with a lot more specific working requirements.

The channel distribution is a very specific order of front right, front center, front left, right surround, left surround, left surround back, right surround back and of course subwoofer. However, for the people who still want to use the Dolby Digital plus with a 5.1 system, this comes with a standard Dolby digital bitstream, that would work with all the users of the Dolby Digital equipped users. This simply means that if you have a 5.1 bitstream, you will work with a 5.1 channel mix instead of the 7.1 channel mix.

One of the several audio formats used in the Blu-ray Disc format, it is also compatible with the audio portion of the HDMI interface which is used in streaming and mobile audio applications.

Use headphones or earphones for a better sound experience.

Now that you have a clear idea of both the different sound systems, how can you decide which one is better for you and your home? Well, don’t worry for you have come to the correct place to help you decide just that! And to do that let us answer some of the basic questions:

What is the basic difference?

Which has the better Audio Experience?

As mentioned before the Dolby Digital plus comes with better sound equalization, more channels, decreased compression, and a more realistic regeneration. This would mean that the sound that it produces would be more clear and would be distributed in a way to make your media come into life.

Final Answer: With a refurbishing of sound that makes sure that you don’t just listen to sound but experience your media, the Dolby Digital plus definitely comes with a better sound.

Which has more channel setup?

One of the main features of the Dolby Digital plus is that it can inculcate a set of 7.1 channel systems whereas Dolby Digital only comes with a 5.1 set up as of the present day. This in itself is a clear indication of the fact that the DDP is a better option for a more realistic sound regeneration, along with the fact with the latest updates, it would be able to deliver up to 15.1 channels. Just imagine the experience!

Final answer: With a present set up of 7.1 channel, and the future of supporting up to 15.1 in a dynamic format/codec, the Dolby Digital plus is definitely one to buy!

Which has a better interaction profile?

The perfection of technology has allowed the Digital Dolby Plus to support the Bonus View (profile 1.1) and the BD-Live (profile 2.0) along with the features of mix stereo and additional secondary audio (for examples the actor/director commentary) right with the main audio source giving you a more enhanced and rich experience. These additional features that work well with the picture in picture option, split-screen, or online real-time viewing, is something that Dolby Digital would be ill-equipped to handle

Which has the better device support?

Final answer: If you look at the past variety of devices, the Dolby Digital is enough. However, when you take the future of technology into consideration along with the past, this is where the Dolby Digital Plus would always win!

Which is Better than the Next-Gen Formats?

As mentioned before the Dolby Digital Plus is the perfect option for ABR (Adaptive Bitrate) such as the HTTP-Live Streaming(HLS) thanks to its ability to deliver better quality content. This would mean that the Digital Dolby Plus would be able to accommodate a number of stream bitrate on the available HLS content

Final Answer: Within the present movement towards technological advancement, the Dolby Digital plus walks hand in hand, giving you more out of the same content than its predecessor.

Which One is Better in Size?

One of the best features of the device more than its orientation is its ability to fit into your décor seamlessly. Though it may not be important for everyone, there are some people who would not appreciate a bulky device occupying all the space. The Digital Dolby plus is better in this as well as it comes with a sleek and elegant device that fits in well with every single house design.

Final answer: If you want that your room is not disturbed the Digital Dolby Plus is definitely a better option.

With a step in the future, the products that dominate the market now should walk hand in hand with the advancements. Considering the points of the comparison above, it is clear that the Dolby Digital plus comes out to be a better contender as compared to Dolby Digital.

However, when you are making a decision for your home, make your own list of pros and cons for both, and don’t forget to match it with ours!